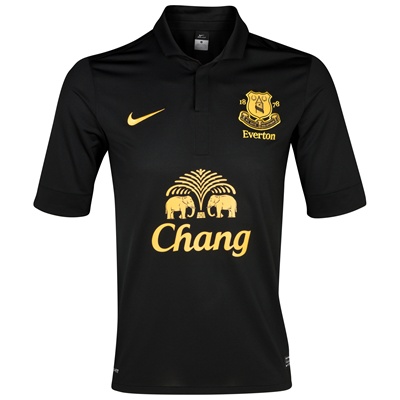 Everton unveiled their new Nike away kit for the 2012-13 season today. As I look forward to a new season, I thought it would be good to recap the season that just went into the books. Everton finished 7th in the table. They had 56 points and a +10 goal differential. They also finished above Liverpool! Over the last five seasons they have finished 5th, 5th, 8th, 7th, and 7th. Once again, in what is becoming a bad habit, they started off slow and then finished strong. In their first 19 games, they earned 24 points. In their last 19 games, they earned 32 points. They earned 10 points against the top 5 clubs, but only 14 against the bottom 5. By contrast, the champions – Manchester City – earned the full 30 points against the bottom 5. It is not inconceivable to think that with a better first half and better play against the bottom clubs, Everton would have challenged for a spot in Europe. There is hope for next season. Nikica Jelavic was a superb January signing and will be fun to watch for a full season. Some of the young players are starting to come on a bit, and Howard still seems to have the goalkeeper position in good hands. Moyes is a great manager. One can only hope that he has some money to spend to improve the team some more. Everton could be on the cusp of something special, or they could be destined for another finish just outside of European qualification. Here’s hoping for the former! In any case, I can’t wait to see the new Nike home kits and for the new season to begin in August!

A Photo of Us »
« Random Photo from the Archives